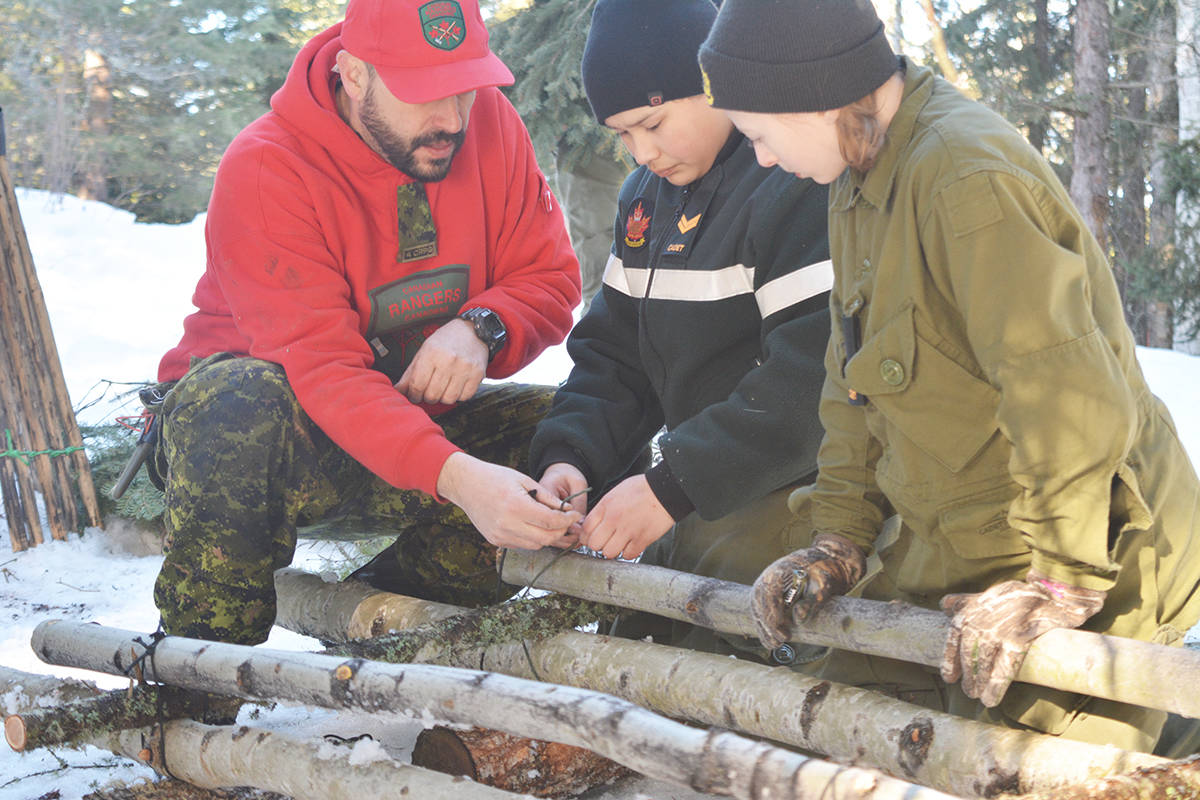 Canadian Rangers and cadets attach a bough bed stretcher to a travois as part of a casualty evacuation exercise during Feb. 1 at Pen-Y-Bryn farm in Kersley. (Lindsay Chung - Quesnel Cariboo Observer) How to start a fire without matches, how to build a stretcher with spruce boughs and logs and how to carry a casualty out of the bush with a horse and a traditional wood travois are just some of the skills army cadets learned this past weekend while training with Canadian Rangers in Quesnel.

“The reason why we wanted to do it is to teach cadets about wilderness survival and give them wilderness survival skills they can take with them into civilian life or if they go into the Canadian Armed Forces,” said Capt. Bill Sheridan, 3064 RCACC’s commanding officer.

“We asked if we could do this with the Rangers that have some skills that we don’t know.”

Cadets spent the morning taking part in snowshoe familiarization training with their own instructors and were then turned over to Canadian Ranger Brett Qually, who taught them how to build fires, and Canadian Rangers recruit John Cooper, who taught them about knife safety. Cadets learned how to start fires using items like char cloth, jute twine and magnesium blocks and how to use knives for batoning (splitting wood by striking your knife with a heavy object, such as a heavy piece of wood) and making feathersticks (a stick with a cluster of thin curls at one end).

After lunch, Canadian Ranger Simon Hall showed cadets an example of a winter camp and taught them how to build an improvised bough bed stretcher in the bush.

Cadets had to carry a stretcher down a steep hill to meet up with Canadian Rangers who had hooked up a travois — a traditional wood load-bearing frame — to their horse, Skip, as part of a casualty evacuation exercise.

Sheridan says a winter training day like this is part of the cadets’ training calendar, and in the past, they have used these days to learn how to build a snow Quonset and how to build shelters.

Cadet Chloe Bennetts was on her first exercise with 3064 RCACC, and she says her favourite part of the day was building fire.

“I like fire and I’ve always liked making fire-type things,” she said.

“The big takeaway for me is we are well-rounded,” he said.

“Not only are we proficient horsemen and instructors, but the Patrol is well-rounded enough to be able to effectively and professionally share knowledge in traditional Canadian Rangers skillets, such as fire building, snowshoeing and adapting to a changing situation and utilizing readily-available natural materials. We are not just a one-trick pony.”